Our story: few schools owe their origin to a cow, a village maiden and an archer’s arrow. The cow was being milked in a field outside the village of Islington in the mid 16th century; the maid, Alice Wilkes – accompanied by a young servant – stopped to watch and try her hand in milking; the arrow from nearby butts, sailed across the field and pierced the crown of her hat, miraculously without injuring her. Much impressed by her providential escape, she vowed that when rich enough she would do something for posterity to mark her gratitude. 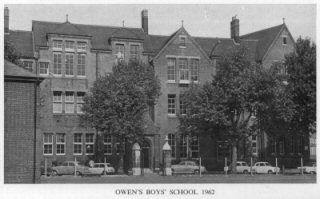 Some 50 years later, Alice Wilkes, thrice widowed by a brewer, a mercer and latterly by Judge Thomas Owen, was a lady of considerable wealth. Reminded of her vow by the servant, she established a school for 30 boy scholars from Islington in 1613. Arrows feature prominently on our school’s crest, which is in itself largely identical to the crest of the Worshipful Company of Brewers. Other motifs include barrels and hops. Dame Alice Owen entrusted the administration of the school and its endowment to the Worshipful Company of Brewers which, for four centuries as Trustees of the Dame Alice Owen Foundation, has supported and encouraged our school. 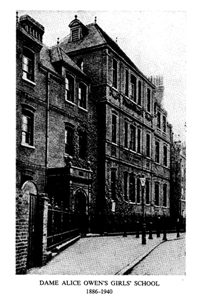 After the foundation of the boys’ school, a girls’ school was built over two and a half centuries later in 1886, also in Islington, which eventually merged with the boys’ school in 1973. This was then run as a mixed school until July 1976 when the transfer of pupils to our new location in Potters Bar, Hertfordshire was completed.

To this day, several roads on and around the site of the original school in Islington maintain names such as Owen Street, Owen’s Row and Owen Fields.

Our new school in Potters Bar opened as a mixed comprehensive in September 1973 and we celebrated our 400th Anniversary in 2013.

Dame Alice Owen’s Girls’ School, Islington – “Instead of being made – make yourself” (created in 1896 by Mr Herbert Spencer, famous philosopher, as requested by the girls’ school’s first Headmistress, Miss Emily Armstrong)

Certain traditions and customs have been retained, the two most notable being –

Dame Alice herself instructed the Governors to visit the school annually to inspect the scholars’ progress. Today, this visit forms part of our school’s Annual Open Day and prize giving ceremony.

The original scholars collected flowers from the surrounding fields to make buttonholes for themselves and to decorate the school; the custom today is for white

carnations to be worn by all pupils in Years 7 to 11, red carnations by the Sixth Form and any Old Owenians present. Governors are presented with white carnations, unless they are Old Owenians!

Our School Song (adapted from The Boys’ School Football Song) is also sung as part of the ceremony. Words of both the original boys’ and girls’ school songs, as recorded in A History of Owen’s School (1613-1976), R.A. Dare B.A., are shown below. When our school moved to Potters Bar in September 1973, Mr Bill Hamilton-Hinds, past pupil (1955-1963), maths master (from 1966) and retired member of staff (from 2016), changed three words of the old Boys Football based School Song to those highlighted in red below to reflect the unisex nature of the new school. The Girls’ School Song is no longer used, however, the music still exists in the school archives. We also have a record of a second earlier Girls’ School song, from a Visitation Programme dated 1936 (image shown below).

It was long-established for the Governors to present the boy who welcomed them at Visitation with a small sum of money. From this probably derives the custom of presenting pupils with “beer money”. Around 1881 the “money grant” was separated out from the Visitation ceremony and presented by the Clerk of Governors to pupils in the Entrance Hall the morning after, with Dame Alice, from her Frampton pedestal, gazing down at pupils, who received their “beer money” in complete silence.

Nowadays, during their first year at the school, all students attend a formal Beer Money ceremony at The Brewers Hall in London where they receive a £5 commemorative coin from The Master of the Worshipful Company of Brewers.

Students from Years 8-13 complete the ceremony at our school in Potters Bar, but still receive the money from The Master. By tradition, the ceremony is held on the very last day of the Summer Term and although students are now allowed to acknowledge the gift, it is still mostly conducted in silence to emphasize the solemnity of the occasion.

The Head Boy and Head Girl receive £10 in recognition of their additional commitments beyond their own study.

We use cookies to ensure that we give you the best experience on our website. If you continue to use this site we will assume that you are happy with it.AcceptPrivacy Policy