An Introduction to the Governing Body by Mr Gary Haigh, Chair of Governors 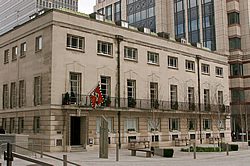 When Dame Alice Owen founded her school in 1613 she entrusted the administration of the school and its endowment to the Worshipful Company of Brewers which, for nearly four centuries as Trustee of the Dame Alice Owen Foundation, has supported and encouraged the school. Throughout the school’s history many members of the Brewers’ Company have served with distinction on the Governing Body, often as Chairmen.

I am a Liveryman and represent the school at the Court (effectively, the Management Board) of the Worshipful Company of Brewers. I was invited to become a Governor of the School in 2018, was elected Deputy Chairman at the end of that year and became Chair of Governors in June 2022.

We have been fortunate during that time to have a consistently strong teaching and support staff, superbly led by consecutive Heads and their Senior Leadership Teams. The school has a proud record for its high academic standards, and for its extra curricular activities which give students a wide range of opportunities. It was judged “outstanding” in every respect in its latest Ofsted inspection. The school regularly sends upwards of twenty students to Oxford or Cambridge, with the vast majority of students (2019:67%) gaining entry to their first choice university, the vast majority being Russell Group institutions. Our A Level and GCSE results year on year stand comparison with the best schools in the country.

In 2021, we were delighted to be awarded The Sunday Times South East State Secondary School of the decade.

The Trustee supports the school financially by providing funds to help maintain buildings and equipment over and above those normally available at a state funded school like ours. The Trustee also supports staff and students in undertaking a wide range of extracurricular activities, including overseas educational and sporting visits. The Master and Wardens, as representatives of the Trustee, make an annual visit to the school in September; and the Master also attends the prize giving ceremony known as ‘Visitation’

The Composition and Role of the Governing Body

The Worshipful Company of Brewers, as Trustee of the Dame Alice Owen Foundation endorse the appointment of Foundation Governors as recommended by the chair, and approved by the Members. Across the Governing Body we are fortunate to have a wide range of skills and backgrounds; including amongst its number: two lawyers, a County Councillor, three from the Financial Services sector, one from the Public Relations industry, scientists, educationalists and a doctor, as well as the brewers, most of whom hold, or have held, senior positions in their professions, industry or commerce.

The full Governing Body normally meets once per term, unless there is a special requirement for an additional meeting.  In addition there are 6 Governing Body Committees covering Finance, Audit and Risk, Personnel and Remuneration, Admissions, Facilities Management and Curriculum.  Each Committee meets termly prior to the termly meeting of the Full Governing Body.  All Governors serve on a minimum of two committees and receive minutes of all committee meetings.

We use cookies to ensure that we give you the best experience on our website. If you continue to use this site we will assume that you are happy with it.AcceptPrivacy Policy